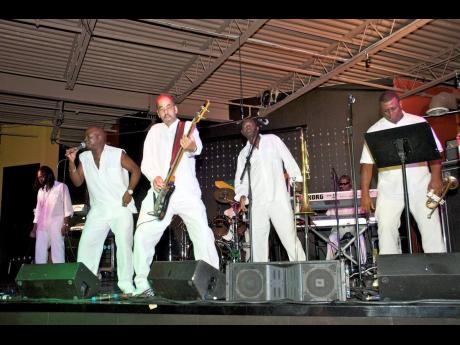 Reggae and soca band Fab 5, formed in Jamaica in November 1970, is celebrating its 50th anniversary this year.

Although the pandemic halted celebratory activities and punched a hole in their earning potential for 2020, the members are upbeat and were only too happy to share their Christmas memories with THE WEEKEND STAR.

Musical director, drummer and founding member, Grub Cooper, fondly recalls the Christmas morning walk to go carolling at people's bedroom windows at 5 a.m., while he was a resident at the Salvation Army School for the Blind.

"And of course, there was the special breakfast Christmas morning and then the excitement of receiving presents after breakfast. Back then, children were the central focus of Christmas celebrations. The commercial aspect came a distant third. Church activities would come a close second to us as children. Oh, how I wish those days would return," Cooper said.

Andre Palmer, trumpeter, grew up at the then named Alpha Boys' School, but always went home to spend Christmas with his mother and brothers. For him, Grand Market night was special. "I loved to see the crowd of people getting their final shopping done. My mother was a vendor in the market so I would sleep early and try to set up with her 'til morning," he said, also remembering the sorrel, which would have some Wray and Nephew rum in it. "That was the only time you get to drink alcohol. But Christmas is not Christmas if I don't get any ham and Christmas cake to eat."

Both Donovan Palmer, keyboard player, and Andrew Cassanova, lead singer, focused on the birth of Christ.

"I remember in my community people were very kind to each other, giving food and presents as well. It was fun to see all of this happening. Christmas is really the most wonderful time of the year," said Palmer. Cassanova said the season "unites us globally as we celebrate, share and show love and care to one another", adding that "A Jamaican Christmas is second to none".

Keyboard player Sidney Thorpe first became aware of Christmas at age three, and remembers the special food and receiving many gifts, most of them musical toys.

"As I grew up, I got to appreciate more the real meaning of Christmas, but nowadays, I have mixed feelings. While the music is still wonderful, considering that I have somewhat contributed to that, I have sad feelings too, as I lost a brother with whom I shared many wonderful Christmases," he said. "He died on his wedding anniversary on December 22, 2016 and you know, you don't just get over that. However, I still enjoy Christmas, as the musical and the religious elements play a major part in my existence."

Like Cooper, guitarist Cleveland Manderson attended The Salvation Army School for the Blind. His fondest memories of Christmas were going home for the holidays and bringing gifts he had bought with pocket money he got at school and from his parents throughout the year. "This meant a great deal to me to be able to give my parents and siblings this small gift each year," he said.

'The most magical time of year' is how bass player and band manager Frankie Campbell describes the Yuletide season, as he remembered the music, Jonkonnu bands, lights, and of course, the presents.

"My best Christmas gift was a brand new Raleigh bicycle when I was 12 years old. I now had my own transportation to go wherever I wanted to go. Here is hoping that today's children are still getting a little of the magic I felt those Christmas days so many years ago," he said.