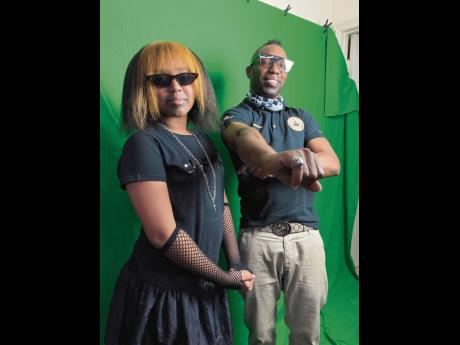 Dancehall artiste Immperial Alley Cat dropped off his fifth studio album 'Dancehall Knowledge, Vol. 4' on Thursday, and among the 'buzzworthy' features is a collaboration with his 11-year-old daughter, Nevaeh.

The song is titled Buzzworthy, and, according to the veteran artiste, it is about a young, hip, influential teenager who everybody wants to be around.

"They have stuff, they are bright in school. Everybody is attracted to that person, dem have a buzz," he said. He explained that the collaboration came about when he heard Nevaeh singing.

"And mi come up with the idea name Buzzworthy and mi pitch it to her. And she liked it and she definitely really deliver the song really good and mi put mi little magic to it and manifest it the right way," the proud father said. He is cautiously thrilled that Nevaeh is walking in his footsteps, but says he would ensure that she takes her formal education to the highest level before allowing her to branch off musically, if that remains her desire.

"She feels good about the feature. She's still a little bit shy and don't understand the realness of the music. But I have to cheer her on and tell her she can't be afraid, because what if one of these days she have to come on the road and sing the song with me on stage? I ask 'What if you go on stage and people don't give you the response that yuh want?' I show her a video with Lauryn Hill when she got booed and then again when she collected an armful of Grammy awards," he said.

Dancehall Knowledge, Vol. 4 continues a series which Immperial Alley Cat intends to take up to number 10, his attempt to leave a legacy. He opined that the project is "my best album yet". "I want to bring dancehall music back to the limelight. What better way to do that than an upbeat and positive list of songs," he said.