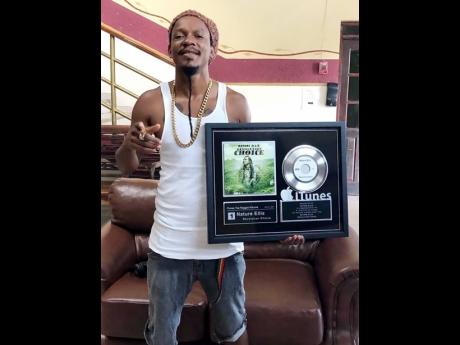 Reggae artiste Nature Ellis celebrated the delivery of a plaque commemorating the success of his third studio album, titled Revolution Choice, which hit No. 1 on the USA iTunes Reggae Album Charts last April.

"This is a proud and a monumental moment of my career, with I unveiling my iTunes #1 Reggae album plaque. This is a long-awaited reward for my hard work and sleepless nights. I want to say thanks to everyone for your continuous support," Nature Ellis said. A video of him unwrapping the plaque was posted on his social media pages on Monday.

Nature Ellis has planned a series of album showcases for venues across Jamaica. The first will be held on February 4 in Kingston, followed by another in Ocho Rios a week later. Stops in Montego Bay [February 18] and the final staging in Negril the following week close out the showcases.

"People need positive music and I am taking the message to them in some small venues. This is my way of showing thanks to you all who made this possible, giving you a live performance from my heart, along with my musical family," he said.

The reggae crooner is known for delivering social commentary and conscious messages to raise awareness on global issues. The album is an extension of this message.

"The album is for the people who are doing their best to keep upright and also the ones who need guidance to the light. It's for ones who love the truth and the ones who are seeking the truth," Nature Ellis added.

For this project, he teamed up with Ambassador of Choice Records, a production label known for the Choice rhythm, featuring Beenie Man, Zamunda, Mojo Herb, Terry Ganzie and Quada.

The first song to be released from the album, To Jah, featuring reggae stalwart Luciano, peaked on the iTunes Reggae Top 100 at No. 3 and on Amazon at No. 5.