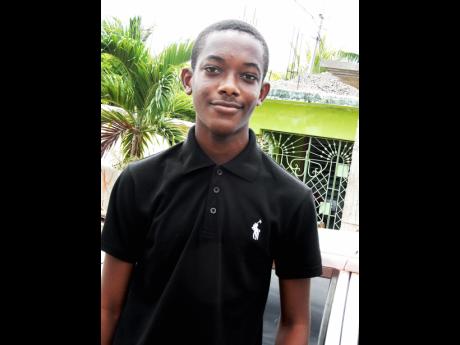 Thirteen-year-old Denbigh High School student Lemuel Shorter (now 14) could not contain his excitement as he shared that he passed the London-based City and Guild level one exam.

He did it at 13 years old, and for his auto mechanic teacher, Lucille Blake, it is a big achievement. The teacher said that she is not aware of anyone acing the exam at such a young age in Jamaica.

Blake, who teaches auto mechanic at Central High the school Shorter attended before being transferred to Denbigh High, said that she encouraged him to sit the exam because she noticed how good he was with his hands.

"I was surprised at how quick he caught up, and he had a terrific memory, reassembling whatever he pulled apart," said Blake, unable to hide her admiration on his skills.

Although he proved to be good at it, Shorter confessed that auto mechanic was not on his agenda.

"When I told my mother I was interested in pursuing robotics, she encouraged me to try auto mechanic," he told the Central Star.

Shorter said that his mother told him it would be good to try that first. She followed up the suggestion by reaching out to Blake and asking her to tutor her son.

With a smile, Shorter said that after he started the lessons, he got truly hooked, and "it grew on me and became fun," he said.

Next on the teen's agenda is to do the electrical aspect of auto mechanic, where he will be targeting the National Council on Technical and Vocational Education and Training (NCTVET) exam as well as tackling City and Guild level two.

Looking ahead, Shorter, who spent most of his years on Bailey's Avenue in May Pen, is now residing in Longville Park, and he has his sights fixed on making it to the University of Technology in a few years, where he will continue to focus on auto mechanic and robotics.