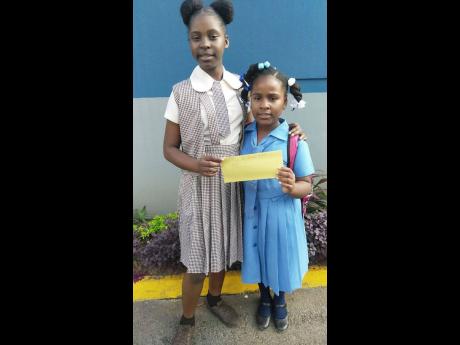 Gabrielle Gibson (left) hands over the money she saved to Brittannia Jones. 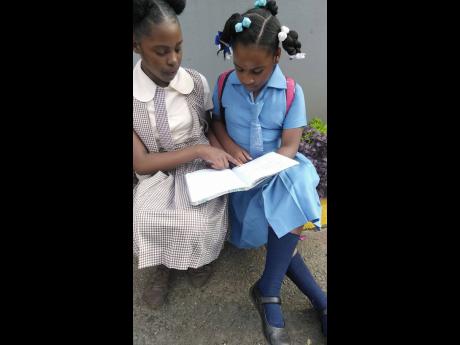 Although she is just 11-years old, Gabrielle Gibson has a big heart. For almost two months she has been taking out a chunk of her lunch money to assist Brittania Jones, a student at May Pen Primary School.

In an interview with THE STAR, the youngster said her heart was broken into pieces when she learnt that Jones sometimes had to go through school hours without food. She added that she was also inspired to help after hearing about her own mother's struggles.

"My mother also told me of how she and her siblings struggled when they were growing up, and I believe no child should ever have to wonder where his/her lunch money is coming from. I just wanted Britannia to get a feeling of a normal childhood because she has a lot of potential. Last month, I decided to play my part and began saving. The best feeling is to know that she will not be hungry at school," she said.

Gibson, a student of El Instituto de Mandevilla, is the youngest member of the James and Friends Education Programme, which assists needy children to attend school.

She also contributed toys and a television set last December to a Clarendon family who was living in deplorable conditions.

She stated that although her parents often offer donations towards the programme, she wanted to make her own contributions.

"I wanted to use my money that they gave me and not to just go to them and ask for stuff. So this is why I saved the $300 from the $1,000 that they are giving me daily for lunch money. I could not eat my lunch in peace knowing that there are other children who have not had a meal. I wish I could help other kids as well, but for now I can help one or two, and I am happy to be a part of Brittannia's life. I am happy that I can make a difference because I know that she is going places," she said.

Gibson's mother, Christine, said although she knew her daughter's generous side was no secret, she got teary-eyed when she discovered a drawer loaded with cash that Gabrielle had saved for charity.

"Every time I would pick her up from school, she would ask me if dinner was ready because she was hungry, and I always wonder why, because she got enough money to last her all day. It turns out that she would take water and snack to school and spend just a portion of her lunch money because she was saving the rest. One day I was going through her stuff and I found a draw full of $100 and $50 and she told me that she was saving to sponsor a child. I got goose pimples instantly," Gibson said.

"I am so proud of this little girl. When she celebrated her 10th birthday, I asked her what she wanted as a gift and she said a clothing line, and not the regular stuff that other children her age wanted. She then launched her Fabbygabby T-shirt line, and all the money she made from it she gave to charity in December. My daughter has a heart of gold and she will receive her blessings," she added.