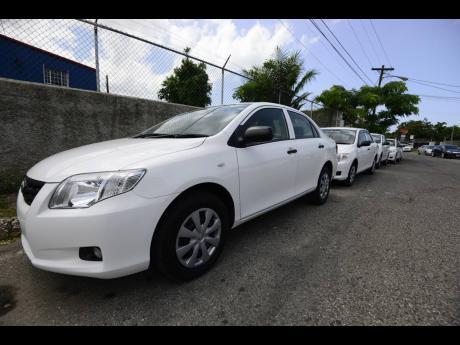 Toyota Axio are said to be the biggest targets by car thieves.

Toyota Axio is the number one vehicle being targeted by criminals, the police have said.

"These are stolen because they can be easily resold and sometimes they are also stolen for parts," Delroy Brown, detective sergeant attached to the motor vehicle unit at Counter-Terrorism and Organised Crime (C-TOC) arm of the police force, told the THE WEEKEND STAR.

Detective Brown said that the Nissan Tiida, AD Wagon and Honda Civic are also among the more common vehicles taken by car thieves.

"They steal other vehicles, depending on the demand, then they will steal the particular ones," he said

Based on the police data, criminals have a particular liking for cars. They have stolen 230 motor cars, 15 trucks, 14 buses and 58 bikes over the period. And when compared with figures from last year, the theft of bikes are up 55 per cent, and the theft of buses have gone up by 85. Car theft has increased by 14 per cent as these vehicles are being stolen at a rate of more than one per day.

"When there's an event like at the National Stadium, you'll find a lot of vehicles are stolen there, because they are not parked in a secure area. So people can always walk in and steal them. And in places like Portmore, where there's a general area where people park they don't have a designated area, people will go there and steal them," he said

He said that because of the ingenuity of the thieves, it is often difficult for the police to recover these stolen vehicles.

"The recovery rate is not as we would want to, because when they are stolen, some of them, they will steal and change their identity, and resell them. While some are sold as parts, so some are never recovered," he said

Detective Brown is therefore advising motorists to put trackers in their vehicles.

"The most common things that people are using now are trackers. That does not prevent the vehicle from being stolen, but the chances of finding it is better. Once it goes missing, then you can use your phone and track it," he said.