Three times the charm - Mother has three sets of twins 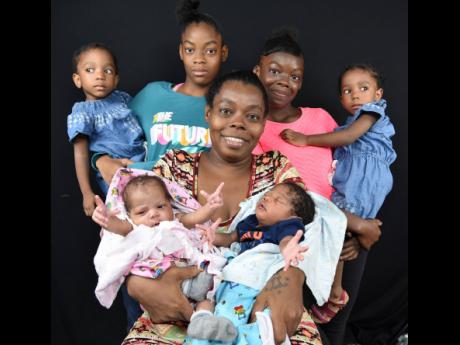 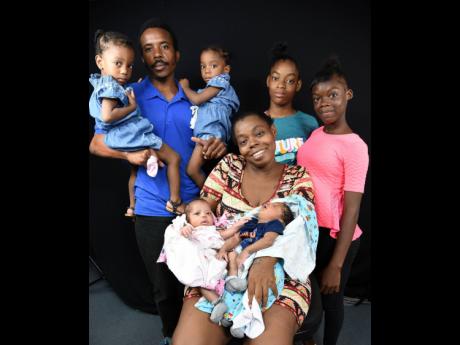 Lisa Tomlinson got pregnant three times, and on each occasion she gave birth to a set of twins. It’s an occurrence that she herself sometimes finds incredible.

“When I was pregnant with the first set, I never knew that I was going to have twins. But when I went to the doctor, I said to the doctor, sometime I feel like two something move inside a mi; she seh is one heartbeat she hear. When I take in on the 30th of March to have baby, I hear when the doctor seh, ‘ we gonna take down Miss Tomlinson to do a ultrasound because is twin she going to have’. I couldn’t believe,” she told THE WEEKEND STAR .

Twelve years later, she found herself pregnant with twins again. “In my second pregnancy, when I find myself sick and I went to the doctor, the doctor seh to me seh, ‘ you don’t know that you having twins?’ she said.

But it was when she was pregnant for the third time, and was told that she was going to have twins yet again, that she was in a state of shock.

“I went to the doctor because I was feeling sick, when him give mi di paper fi go do the ultrasound. When the lady ask where I feel the pain, mi only hear she seh, ‘ hmmmm, mommy yuh expecting twins again’. I said, ‘ what? But I not here for that, I’m here for pains in my belly. ‘She said, ‘ the pain is there, but the babies are there, too’,” she recalled, laughing.

And after giving birth to two sets of girls, 14-year-old Shauna-Kay and Anna-Kay White; and two-year-old Lianna and Lianne Bryan, she hoped that the third time around she’d have a boy in the mix. Her prayers were answered when she gave birth to Kehoe Jr, and Keana Bryan, now one month old.

Tomlinson said her mother is a twin, who had 11 children, but no twins. She said that of all her six sisters, she’s the only one who has been producing twins.

But the Spoilers, central Kingston resident said raising three sets of twins can be challenging.

“It can be very hard for me, because right now, me not working. The father is the only one that’s working and the work weh him do, it nuh really pay that much, but mi try fi mek it work,” she said.

“I used to get PATH [ Programme of Advancement Through Health and Education] for them right through, and all of a sudden mi only getting for two a dem,” she said.

She said she has tried to get them all back on PATH but has not been successful.

However, she said she has the support of her partner, Kehoe Bryan, who fathers the two younger sets.

“Their father is such a joy to me, because when he came into my life with the first two, I never have no one but my bigger sister to help me with them. And when he came and see seh they are twins, him never, like, shut mi out and seh him caan do this and do that. Him try fi do everything fi dem, him try fi mek it work. Sometime when wi nuh have money, and food and so forth, him borrow it, and when him get pay him pay it back,” she said.

Plus, she said she enjoys the novelty of having three sets of twins. “When people see mi, dem a seh twins, and dem seh, ‘ wow, twins! You are so blessed, mek sure yuh taking care of them,’ and I seh. ‘Yes, I will take care of them’,” she said.