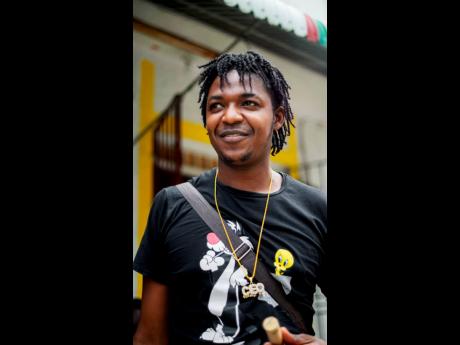 Determined to be creative in the spelling of his stage name, this singjay took a regular word from the dictionary, replaced the 'ce' at the end with 'zz' ,and with the click of a finger, Substanzz was born. This artiste, however, could easily have named himself 'Confidenzz' because he is brimming with conviction.

He told THE STAR that he chose that particular name because"Substanzz fit me like mi favourite shirt". He added: "It fits my standard, my style, and my personality. Plus, all my songs are full of substance."

A St Thomas resident who attended the Seaforth High School in the parish, Substanzz has been getting high on music since he was seven years old and used to spend summer holidays with his musically inclined cousins in Sunning Hill, the stomping ground for dancehall kingpin Popcaan.

"This led to me always singing their songs in primary school, but by the time I reached grade nine, I was writing my own lyrics and recording my own tunes. By then, I made my career choice. I knew that I didn't want to be a soldier or an accountant or anything like that. I wanted to be an entertainer," Substanzz, whose real name is Cavin Stewart, shared with THE STAR.

Pursuit of that goal

In pursuit of that goal, one of the things that he did was enter the Magnum Kings and Queens of Dancehall talent contest in 2017. It was perhaps a case of not having quite enough substance at that juncture, but Substanzz didn't make much of an impact. Undeterred, the singjay continued his journey.

"I told myself that I was never going to give up, and so I continued to record and send out demos until people started to take note," Substanzz said.

He has since linked with quite a few producers and sound-system players both locally and overseas, doing dubs for the England-based King Tubbys and voicing in studios across the island.

"We all reach Junior Reid studio in Kingston, Hilltop Studio in Bull Bay, and we do songs for a lot of labels," he said. Among them are Billion Music Group, Queen Genna Records, Pepedon Records, and Mario Gunz Music.

His solo effort, Shadow, is getting some traction, and one of his collabs that he thinks has a lot of potential is the Zoomm Records-produced 14K, done with Chronic Law. Released last December, it has been doing fairly well, but Substanzz believes that with the right push, it could stir up the dancehall.

"It don't get the right endorsement as yet, but I'm the only one pushing it, and yuh know, my name doesn't have that ring right now. But time is the master," Substanzz declared.