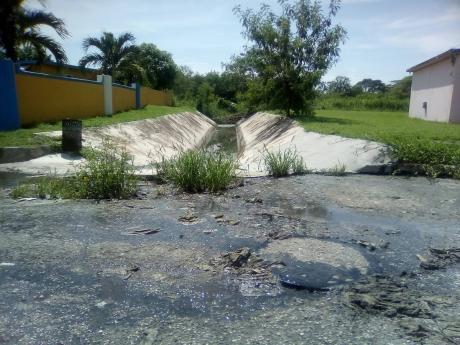 Raw sewage seeping on to the roadway has been a problem for some residents of Innswood Village in St Catherine. 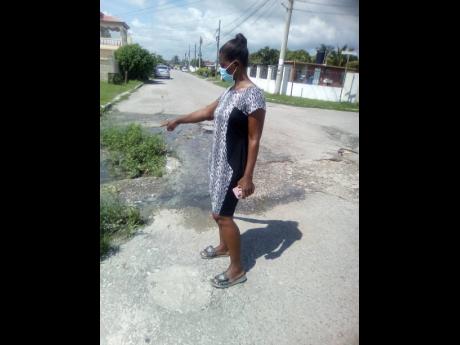 Resident Ann-Marie Marshalleck pointed to the nasty water near her gate in Innswood Village.
1
2

Residents of Pattoo Avenue in Innswood Village, St Catherine, have been left fuming over health concerns linked to overflowing sewage, which has caused a stench to hang over their community.

Raw effluent has been seeping on to roads for more than a month, said Ann-Marie Marshalleck, who has lived in Innswood Village since 2004.

"What existed was the nasty stench, raw sewage, swarms of flies, and residents getting sick. We have complained to the relevant authorities, but nothing happens," she told THE STAR.

Puddles were observed on Monday, October 12, as bubbling sewage poured from a manhole at the intersection of Innswood Drive and Pattoo Avenue.

The pools of effluent have provided breeding grounds for mosquitoes amid the rainy season, compounding the residents' misery and causing a nuisance at night-time.

"We have been suffering. We cannot open our windows due to the condition," said a woman, who spoke on condition of anonymity.

"We are subjected to constant filth just rising, and it has now become unbearable. We can't take it anymore."

The residents said that the problem has worsened since the addition of another housing development to the sewerage system in 2012.

Innswood Village was built to accommodate professionals, but the sewage problem has been so intrusive, it has invaded their homes.

"The thing is so bad that whenever you flush your toilet, the raw sewage comes up. The problem is grave and needs urgent attention," said Merdeen Brown.

St Catherine South Central Member of Parliament Dr Andrew Wheatley has acknowledged that he is aware of the woes in Innswood Village, which falls in his constituency, and empathised with the residents.

"The sewerage problems are real for the residents. They are not being mischievous. The National Water Commission (NWC) is to be blamed for not properly maintaining the facilities," Wheatley told THE STAR.

He said that he has regularly lobbied on the residents' behalf, with the NWC sending a vacuum-fitted truck as a temporary measure.

But Innswood Village needs an overhaul to the system, he said.

"This needs more than a band-aid approach. NWC needs to upgrade the system to effectively serve the residents," Wheatley said.

Andrew Canon, corporate communications manager at NWC, said that the entity is aware of the long-standing problem and is working to increase capacity to manage the load.

Work is being done on the treatment plant and on-site lift station, Canon told THE STAR on Tuesday.

"The recent rain caused excessive debris to be deposited in the manholes, causing overflows. In light of the gravity of the situation, we will be adding another pumping unit," Canon said.