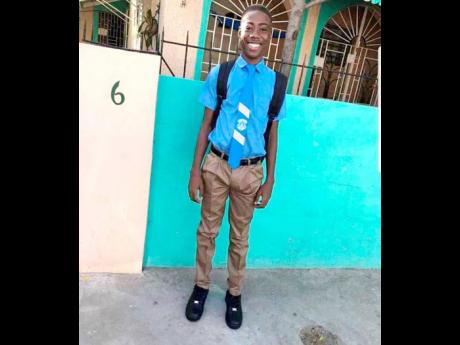 When Shania Sinclair heard that her only child, 16-year-old Matthew 'David' Chisholm, had been shot, she found it painfully hard to believe.

Having shared his dinner earlier that night and watched him eat it, she went to bed thinking all was well. But Sinclair was later awakened by a call, and was told "Yuh son get shot."

"I jump up and I run go up there and I see his body on the ground. I called out his name! I kept saying David because that's what I call him, and I started to cry. Then I started crying out for Jesus," she recalled. An experienced nurse, she gripped her son's body, trying to save him, but it was too late.

"I start to feel him and check him and no pulse, nothing. I hold him up and when I do that, I realised that he was already dead, because his eyes were open and his mouth was open. I realised that he died already. Same time the police came and we rush with him go to Kingston Public Hospital," she said.

Sinclair recalled that after dinner, her son borrowed her phone and went to his father's house.

"Him lock up the house and everything. I can remember that. He was like two blocks from where I was," Sinclair told THE STAR.

It is reported that about 2:20 a.m. on Monday, Matthew was at his home with friends when they were playing with an illegal firearm, during which a round was discharged hitting Matthew in the chest. The police were summoned and the teen was rushed to hospital where he was pronounced dead. It is unclear if anyone is in custody for the shooting.

Sinclair said that she is a child of God, and is leaning on him to get her through this tragedy.

"I'm not saying I'm not hurt ... the pain is there. But God give me that peace. I'm just holding on to his words going forward," she said. Chisholm's passion was football and he was recently transferred from Norman Manley High School to Penwood High School.

"Football was his dream. He chose business subjects and he really loved maths. I will remember my son to be a very funny person. He always has this smile ... and whenever I see it, me heart melt. His personality was amazing and he was very smart and understanding. Him eva a give some joke and in a gimmicks. That is what I really remember about my son," Sinclair said.