They did it! - Brother and sister become lawyers together 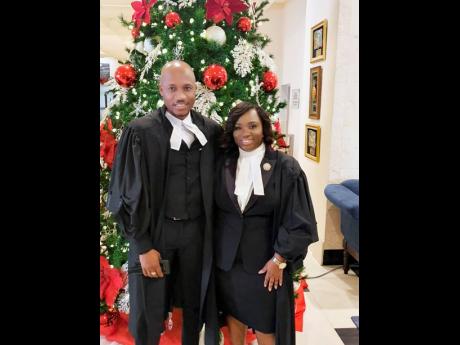 Dewayne and Feleca Jonas were like peas in a pod when they were growing up in Belmont district, Lawrence Tavern, St Andrew. The two, who were among six children for Daisylin Dacres and Constantine Jonas, still share a special bond.

On Tuesday, Dewayne, 37, and Feleca, 35, accomplished a major feat together after they were called to the Bar, which means they have entered into a law society and are now lawyers.

"I think our journey was ordained by God because some things that happened during the courses of study, some would have given up. But God made it possible," said Dewayne, a detective sergeant in the Jamaica Constabulary Force (JCF). He said that he originally wanted to become an artist as he draws well. However, at age 20, he enrolled in basic training at the police academy and developed a passion for the law after receiving the book of laws and police procedures. Feleca only truly started considering law when she began working at a law firm at age 18.

The Oberlin High school past students' journey into the legal profession dates back to 2011 when Dewayne brought Feleca's attention to a pre-law programme that was being offered at the University of Technology, (UTech) Jamaica.

"When I heard about the law programme at UTech, I told her and we did the prerequisites then advanced to the faculty," Dewayne told THE WEEKEND STAR. They then embarked on five tough years of balancing work, study and personal life. "The journey was hard but not withstanding that we had to overcome," Feleca said.

The siblings again became each other's tower of strength. "At one point my sister got pregnant and I had to take notes for her ... and doubled up on the courses," Dewayne said.

Feleca also stepped up for her big brother after he had an accident. "He spent a month in the hospital and I had to ensure I got all the notes for him. We were always there for each other," she said.

She recalled being the one who "took care" of Dewayne after their mother died in 2000; she was 15 and Dewayne was 17.

"I took care of him, even throughout his training in the police academy. I washed for him, cooked and looked after his meals and ensured that he was OK. We took care of each other," she said. Their father, Constantine, died in 2018, just when the siblings were about to enter Norman Manley Law School.

"We realised that we have no parents so we have to make them proud while doing it for ourselves," Dewayne said. "We studied and dealt with the Norman Manley entrance exam like it was our last chance. We persevered and encouraged each other. At one point my sister said she didn't know if she could keep up, and I said 'you have to'."

"It is a wonderful feeling to see how things are going with us, even at the calling [to the Bar] my brother hugged me and said, 'Fel, we did it. We are attorneys-at-law'," said Feleca.

"I'm elated because we know our journey and the work we put in, and we can now reap the success," Dewayne said as he dreamed about the establishment of Jonas and Jonas law firm. "The best is yet to come."