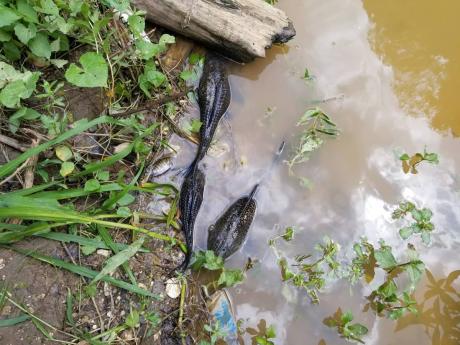 Dead fish seen in the Rio Cobre on Monday.

West Indies Alumina Company (Windalco) says it is not responsible for the massive fish kill in the Rio Cobre in St Catherine.

The National Environment and Planning Agency said that Windalco will be charged for reportedly releasing effluent into the river which led to the death of fish and other aquatic life earlier this week.

However, Windalco said that while there was a spill of the effluent holding pond, based on its monitoring data and the preventative measures employed, it is confident that the spillage did not have any deleterious impact on the environment.

"We do not accept liability for the fish kill; however, we are mindful of the importance of the river to residents in and around the affected areas of the Rio Cobre and have taken measures to restore normalcy to the river inclusive of the removal of dead fish," the mining company said.

The Jamaica Environment Trust has expressed concern over the repeated discharges into the Rio Cobre. It notes that Windalco has received multiple breach notices and are currently the defendants in a legal case filed by the National Environment and Planning Agency over a 2019 discharge into the river which resulted in a massive fish kill and several persons falling ill.