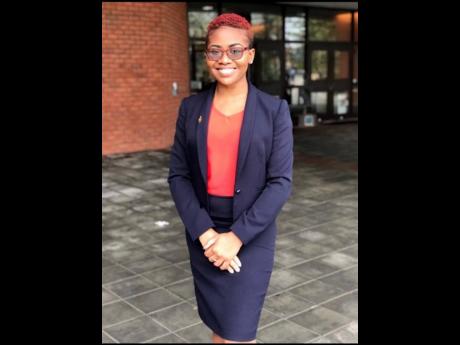 Equipped with US$450, faith and her aspiration of becoming a business professional, Brianna Plowright left her home in Portmore, St Catherine, in 2016 to attend university in Washington, DC.

Between being accepted to prestigious Howard University, she waited six months before departing the island as there were doubts she could fund her tertiary education.

Now, she is employed to software giant Microsoft as a cloud supply chain planner. The 24-year-old admits that she could not have predicted that she would work with the famed corporation.

"Working at Microsoft, there is no downside and there is a lot of embracing of diversity. There are a good number of Jamaicans there, and I try to remain authentic in my 'Jamaicaness'; I am pretty much admired for it," she said. Her journey was filled with difficulties but she adapted a spirit that was determined to achieve. She was actually rejected twice before landing an internship in 2019.

"I applied three times because I saw the impact, they [Microsoft] had on the world and from I was smaller, I knew about Microsoft, and I knew that they were always empowering other people and their motto is to empower other people, and I like to lift people as I climb. It was a direct link between what they stand for and what I stand for. It just seemed like the company for me," Plowright explained.

While a student at Dunrobin Preparatory School, Plowright worked hard to be a top achiever and at age 11, woke at 4 a.m. daily to study for the Grade Six Achievement Test. She passed for her first choice, Campion College, and later copped nine subjects at Caribbean Secondary Education Certificate and 10 units of Caribbean Advanced Proficiency Examination with grades ones and twos.

Plowright yearned to attend university overseas but her mother, Kim Campbell-Nelson, was a sales support representative who could not afford the US$2,000 (approximately J$309,000) for SAT classes. So Plowright spent most of her time doing individual study as well as occasionally attending Maths Unlimited classes that cost J$10,000 a month.

"A lot of people asked me how I was going to pay for it [overseas study] and I always kept this saying by Martin Luther King, 'just take the first step in faith, you don't have to see the entire staircase'. From then on up until today I just take it one step at a time," she related.

In May 2016, she was accepted to attend Howard and sent a heartfelt letter to the financial aid office.

"He [the representative at the financial aid office] called me back the next day and told me that they can give me tuition and an on-campus job for the first year... I just got goosebumps. I was being funded US$30,000 for that year plus a job, I was just excited," Plowright shared.

"There are people out there who want to help someone like you, you just have to find them. How do you find them? You keep networking with others, you keep vocalising what you want and you keep the mindset that 'where there's a will, there's a way'. You also keep a mindset that you take the first step in faith and keep it moving," Plowright told THE STAR.