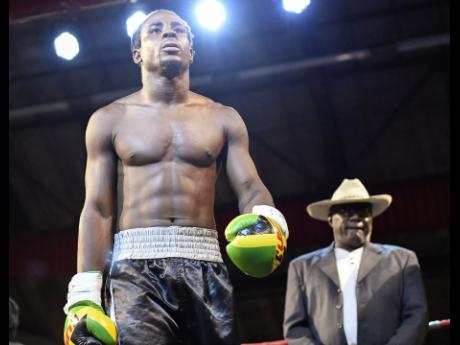 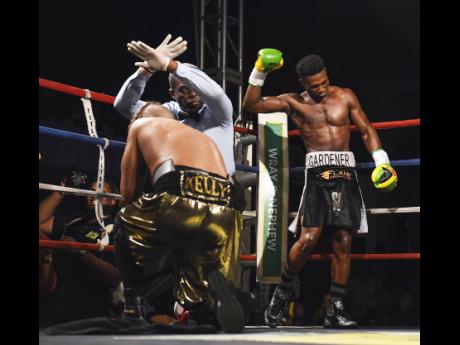 Michael 'Wasp' Gardener (right) celebrates as referee Peter Richards stops the fight after Jason Kelly (on ground) is knocked down a second time in the first round in the Wray and Nephew Contender Series at the Chinese Benevolent Association Auditorium on Wednesday May 2.
1
2

The Wray and Nephew Contender Series sees two-time finalist Richard 'Frog' Holmes being considered as the favourite to win this season. However, crowd favourite Michael 'Wasp' Gardener is also in the competition and is expected by many boxing enthusiasts to be the main threat to Holmes this year.

After Holmes' win over Canadian Lloyd Reyes in week one of the competition, his trainer, Carl Grant, said that there are only two other boxers in the competition who could make things difficult for his fighter. These are team Canada's Ricardo Salas and Gardener.

After Gardener's first-round technical-knockout win over Jason Kelly, he commented on the possibility of facing Holmes.

"[With this win] mi send a message to everybody inna di competition," he said. "Richard 'Frog' Holmes, look out!"

Gardener said that what he sees as Holmes' lack of stamina would hurt him.

"Frog, as the three-round fighter you are, yuh naa go last more than that," Gardener said with a smirk. "Yuh a go tek a punishment inna di first and the second, and yuh a go retire inna di third round. Nuh more dan dat."

But Holmes was unbothered by these comments.

"The higher di monkey climb, the more him exposed. Mi nuh have nutn more fi seh to him," Holmes said.

Gardener started his career at the Bruising Boxing Gym in Stony Hill, St Andrew, where Holmes is currently based. He was also coached by Grant. However, the 24-year-old is under the guidance of local trainer Castro Brown while on the island. He also spends time in New York and Panama training.

Both boxers are into the second stage of the competition but are unsure if and when they will face each other as fixtures will be determined by a random draw.