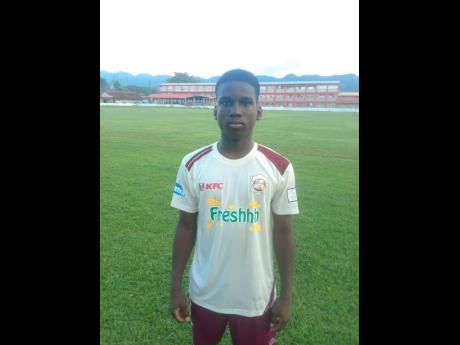 Despite suffering their second 1-0 defeat in as many games in the ISSA/WATA daCosta Cup, national under-15 representative Rahiem Heaven is looking to inspire Herbert Morrison and kick-start their campaign.

Spot Valley High School's substitute Travoy Vassell got the lone goal of the contest in the 53rd minute of the game that was played at the Herbert Morrison playfield.

However, Heaven, who is looking to lead from the front in getting them on the scoresheet for the first time this season, admitted the going has been tough so far, but assured they will turn things around come tomorrow.

"It has been tough because we have been training very hard and the expectations from our coaches and supporters are very high. Yes, we are disappointed but we just have to come back again. I can lead the team by talking to them and us having more communication with each other, because we have that bond, so we can use that togetherness to try and fight even though we are down," said Heaven.

GETTING OUT THE ZONE

"I can see that we have trouble getting the ball in the back of the net but we are working on it, so we just have to display it in our matches. I see us coming back on Saturday (tomorrow) against William Knibb. I also see us getting out of the zone and into the second round and hopefully then to the quarter-finals," he added.

Lecroft Letman, coach of Herbert Morrison believes that a lack of maturity is playing a big part in their struggles. He pointed out that there should not be any added pressure placed on young Heaven as they just need to get there finishing stronger as a unit.

"At this level, it's mostly 19 and 18 year old players and most of our players are 15 and 16 so maturity is another factor that is hampering us, but such is life. This is football and once you're at the big stage, you're expected to perform," he added.