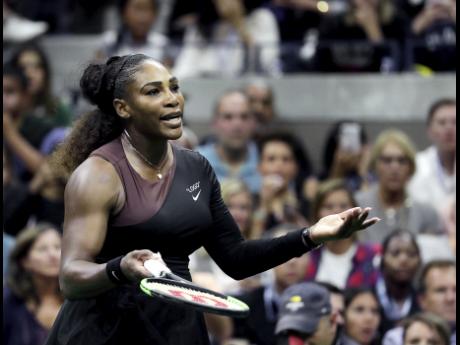 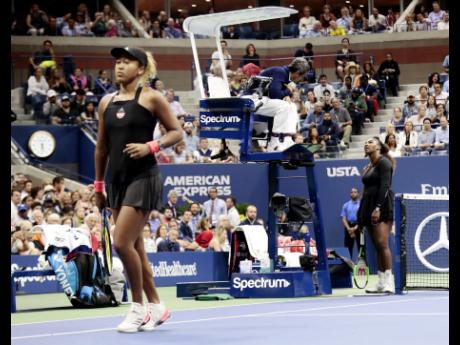 Last Saturday, I had a choice between watching the Women's finals of the US Open tennis competition on television and heading out to Catherine Hall in Montego Bay to watch the season-opening ISSA/WATA daCosta Cup clash between champions Rusea's and Green Island. Without much contemplation, I decided on the tennis.

I just could not see myself not watching the tennis, which featured one of my favourite female sporting personalities, the great Serena Williams, who would have created history, if she had beaten Japanese first-time Grand Slam finalist Naomi Osaka, to become the woman with the most Grand Slam titles.

While I am sure that Serena will have more opportunities to win a record-breaking 24th Grand Slam title, I just wanted to see her get this achievement out of the way as quickly as possible. Personally, it would pain my heart to see her get stuck on 23 titles in the way that golfer Tiger Woods has remained on 14 major golf titles since 2008.

To see Serena playing below expectation and then compounding the situation by verbally attacking umpire Carlos Ramos did not only leave me wishing that I had gone off to the football match, but, in a way, left me bewildered as to why she would have decided to squander the significant goodwill she had developed over the years as the consummate professional.

As I watched the tears flow down Osaka's face during the presentation ceremony, I could not help wondering what she was thinking. Before the final, she had made it clear that Serena was her idol and made no bones about the fact that she was delighted to be playing her in the final. To see Serena throwing such an unnecessary tantrum, which somewhat marred her victory; Osaka must have been wondering what had become of her idol's much vaunted gracefulness.

While I am prepared to forgive Serena, since bad behaviour is not the norm with her, I wish she would admit that she made a terrible mistake and stop playing the gender card, which she has been playing. While it is true that male players have behaved badly in the past, I can't recall any of them berating an umpire in the manner Serena let loose on Ramos.

I believe it would be a gross dereliction of its responsibility if the United States Tennis Association (USTA) did not penalise Serena for the uncouth way in which she tarnished the image of the sport that made her into a global superstar. In fact, I believe the USTA acted quite leniently in the measly US$17,000 fine they slapped on her.

I have heard some persons blasting Ramos, claiming that it was he who had provoked Serena to wrath. While the umpire might have been tough in his interpretation in one or two of the three infringements he penalised her for, I believe she created the situation by prolonging an argument she couldn't win that ultimately led to her calling Ramos a thief.

I have seen occasions in the past where top-flight sportsmen behaved badly, but in most cases, it is spontaneous, which makes it easy to sympathise with them and ultimately forgive them. When legendary West Indies fast bowler Michael Holding kicked down the stumps during a test match in the 1979/80 tour of New Zealand, I did not hold it against him because it was a spontaneous reaction to a terrible decision by the umpire.

I know that after putting many hours into training and preparation, the last thing one would want is to see a match official, either through dishonesty or incompetence, causing you to suffer defeat. In the early 1980s, I remember watching a daCosta Cup final, where even supporters of the victorious team openly admitted that the referee had handed them victory on a platter.

I believe that in much the same manner that Serena was badgering Ramos for an apology, she should consider taking her own advice and make a public apology to Osaka and the many other young female tennis players who see her as both their idol and their role model. However, whether Serena shows remorse for her behaviour or not, I will continue to root for her because she is an absolutely fantastic tennis player.