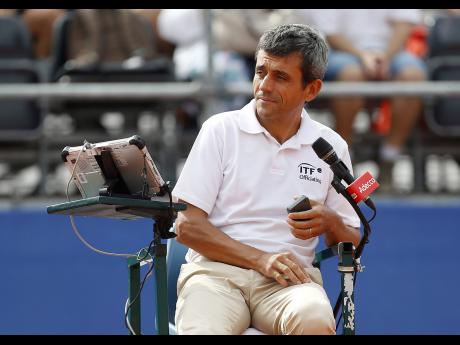 The chair umpire who penalised Serena Williams in the US Open final is back at work.

Carlos Ramos is working the best-of-five Davis Cup semi-final series between Croatia and the United States.

"I'm just focusing on this tie and working again. That's all I can say," Ramos told The Associated Press yesterday.

Ramos officiated the second singles match between Marin Cilic and Frances Tiafoe, which was completed without incident.

Ramos calmed the raucous crowd on several occasions and came down from his chair to check a few ball marks in the clay but otherwise had no impact on the match, which Cilic won in straight sets to give Croatia a 2-0 lead.

"It was great. There were even a few calls where he came to check. Everything was really good," Cilic said. "The atmosphere was also great. I enjoyed every single second of the match."

Tiafoe, who was making his Davis Cup debut, also didn't have any complaints.

"I didn't know Ramos was sitting in the chair. I really wasn't paying attention," Tiafoe said. "I was more worried about the person across the net than the official."

US captain Jim Courier added: "We thought the officiating was excellent all day long."

Ramos gave Williams three code violations in her straight-set loss to Naomi Osaka last weekend, and the American great argued she was not being treated the same as some male players.

USTA president and CEO Katrina Adams, who defended Williams, was overheard apologising to Ramos on the sidelines of Thursday's draw ceremony.

Ramos would not go into details over his discussion with Adams, who initiated the conversation.

"You know I cannot talk about that," Ramos said.