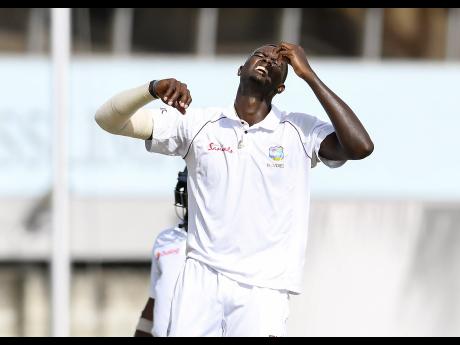 West Indies have lost one ratings point following their series defeat to India on Sunday, leaving them still languishing in ninth spot in the ICC Test team rankings and even closer now to minnows Bangladesh below them.

The Caribbean side suffered a 10-wicket thrashing in the second Test in Hyderabad, to follow up their heavy innings and 272-run defeat in the Rajkot opener. Both matches finished inside three days.

West Indies have 76 points, nine points ahead of 10th-place Bangladesh, who they tour next month for a crucial two-Test series.

More significantly, the Windies are now 12 points adrift of eighth place Pakistan, and drifting further away from top half of the rankings.

Following the latest defeat on Sunday, captain Jason Holder called for collective effort to find ways to get the Caribbean side out of the doldrums.

"Honestly, it's hard to take it. I am trying to understand the reasons why it is happening. It's a case where we all need to put our heads together - the management, the selectors and the players," Holder said.

"The onus must be on the players and we must be responsible for our actions. We got to come together a little bit more and find ways and solutions to deal with the problems that we have at the moment."

Once World champions, West Indies have declined badly over the last 20 years, and have not had a series win over a top-ranked side in six years, since beating New Zealand in the Caribbean.

They lost six of 10 Tests last year, despite beating leading sides Pakistan and England, and have won just three of seven this year.

India, meanwhile, have gained one ratings point from the series win and remain number one on 116 points. They are 10 clear of second-placed South Africa with Australia a fraction behind in third, also on 106.

England are fourth on 105, New Zealand fifth on 102, while Sri Lanka, who drew 1-1 in the Caribbean earlier this year, lie sixth on 97 points.