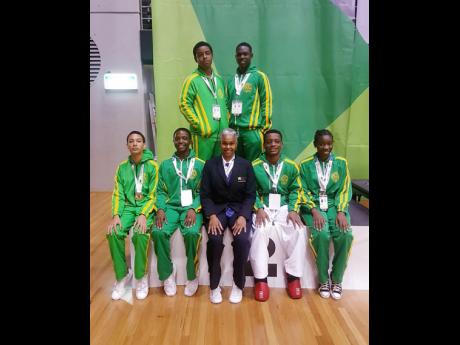 Joleen Masters (centre, seated) with members of the team.

A team from the Mandeville Tae-kwon-Do Centre recently competed in the World Cup of Tae-kwon-Do in Australia.

The competition started in late September and lasted for a few days. The team consisted of six students, one girl and five boys, ages 15 to 17.

The lone female, Jade Dewar, walked away with a silver, while a bronze medal was awarded to Matthew Peart. Both got their medals in sparring.

Joleen Masters, a tae-kwon-do practitioner since the 1980s, is chief instructor at the centre.

She has been serving in this position following the passing of Harrison Chin-Hing 18 months ago.

She said that the team prepared for two years leading up to the World Cup.

The training consisted of distance running and short sprints in order to boost stamina. The students would also train with other member schools twice per year in Kingston.

Masters said that the team did not enter any other competition in order to minimise injury.

"A few members of this team have expressed an interest to go to the next World Cup in 2020 in Koper, Slovenia," she said.

The team is also expected to compete in the annual open tae-kwon-do tournament in April 2019 in Kingston and the Ultimate Tae-kwon-Do Challenge in New Jersey, also in April 2019.

"As an instructor of children (ages three to 17 years) it is something that I enjoy immensely. It is an absolute joy for me to pressure them and then we both share the rewards," said Masters.