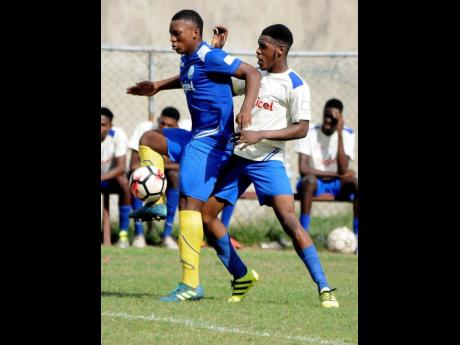 Hydel's Kemar Reid controls the ball ahead of Cumberland's Deandre Hinds during their Walker Cup semi-final encounter at Prison Oval,Spanish Town on November 9, 2018.

Hydel High School's place in the final of the ISSA Walker Cup knockout competition is largely down to ace striker Kemar Bennett.

Reid and his teammates are scheduled to take on Excelsior High School in the Walker Cup final today at 4 p.m. at the Stadium East field.

Bennett netted a goal and an assist in their semi-final against Cumberland to lead his team to their first schoolboy football final since 2012 when they made the Manning Cup final.

Reid, who took his tally to 12 goals for the season, with his strike against Cumberland, was in a very confident mood when STAR Sports caught up with him yesterday and he promised two goals to lead the St Catherine- based school to their first schoolboy football trophy.

"I am the leading scorer in the team with 12 goals and I am feeling so great (ahead of final). I know I am the man right now and I am sure about (scoring) a double in the game," he said.

Reid, who led Duhaney Park to an Under-15 title and an Under-17 final, in the past, is excited about this final and he's determined to make a big impression and leave his name in the record books by helping Hydel to their first football title.

"It's been a long time since I have been in a final, so this is going to be a major one and I plan to play my part, so we will be coming all out," he said.

"Excelsior is a good team but we need this more than them. This is the first title Hydel will win, as this is my last year in school and I want to be part of this history. And this is the best way to leave, by leaving something behind," he commented.

The powerful and strongly built forward has been a terror for most schoolboy defenders this season with his pace, skills, strength, and his pressing game. He gives defenders very little time on the ball, and he is confident of producing the goods again like he did in the semi-finals against Cumberland.

"I was very confident against Cumberland. I was very good in the first half until I got a knee in my back and that kind of slowed me down. But I made a great run, pressured the defence and made a brilliant finish for the goal. It was a good goal," he recalled.