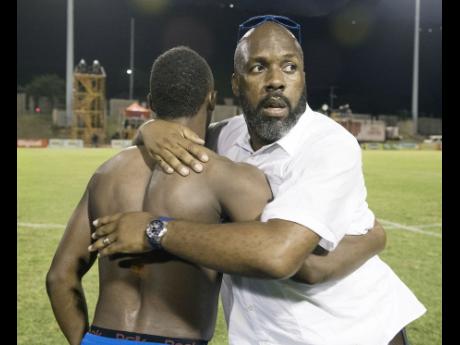 Gladstone Taylor / Photographer Hydel High's coach Corey Bennett (right) congratulates one of his players after they defeated Excelsior High 2-0 to win the 2018 Walker Cup at the Stadium East field yesterday.

Hydel High's head coach, Corey Bennett, said after a below par first half in the Walker Cup final against Excelsior at Stadium East yesterday, they had to re-energise the team at the break.

The coach's pep talk worked. The Ferry-based school took control in the second half and emerged 2-0 winners. It was Hydel's first schoolboy football title in the school's 25-year history.

Fakibi Farquharson fired Hydel into the lead from Kemar Reid's assist in the 74th minute. Then Deandre Walker sealed the win two minutes into added time with Excelsior pushing for the equaliser.

However, Bennett said after the poor first-half they had, he told the boys they couldn't play any worse and that they were still level at 0-0.

"We had a shaky first-half but half time helped us and we got it together and we really give God thanks for this one," he said.

He also took a jibe at Excelsior coach, Daniel Riley, who he thought did not show them enough respect leading up to the final.

"The coach said he wanted Hydel (in the final), 'so is we them get.' The coach has been talking a lot like we don't exist. I hope we exist now, as we beat them in their own backyard," he commented

He added that. "Words can't explain this is our 25th anniversary and we thank God for this one. He pulled us through."

Excelsior only had themselves to blame as they created the better chances throughout the game, and despite hitting the woodwork twice, they were woeful in front of goal.

The seven-time champions who last won the trophy in 2008, were also reduced to ten men when captain Roman Beadle was red carded in the fifth minute of added time.