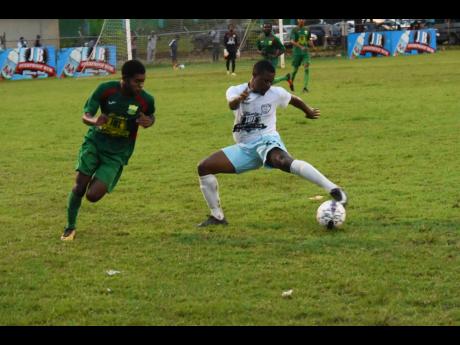 Marvin Sangster (right) and Tyshan Hill, both of Faulkland, were shown red cards.

The Western Confederation has not yet come to a decision as to the sanctions to be handed down following a brawl during Sunday's JFF Western Confederation Charley's JB Rum Super League match between Faulkland and Harmony at Jarrett Park. Three players were shown red cards, including a teenager who is now nursing multiple facial fractures.

The game was reportedly halted for more than 10 minutes after which Tyshan Hill and Marvin Sangster of Faulkland and Richard Henry of Harmony were shown red cards for violent conduct. Henry, 17, a student of Brown's Town High, was discharged from the hospital on Monday and is resting at home.

General secretary of the Western Confederation Ronald McLean told STAR Sports that they have not yet read the match report and that the absence of the assigned match commissioner has slowed the disciplinary process.

"I can't provide you with full details as yet as the report from the referee got to us yesterday (Wednesday) evening. From what we hear on the street and persons around, it was terrible. One player might still be in the hospital with some fractured bones in the face," McLean said.

"We would have to examine the report before a decision can be made. They will have to be placed on indefinite suspension until a final decision is made. We possibly could be looking at a multiple match ban but we will follow the correct channel as per FIFA regulations."

Coach of Faulkland, Gregory Palmer, who expressed disappointment in his team's behaviour, said they have not yet received word from the Confed.

"The club has not yet been contacted or called to a meeting so there is not much I can say," said Palmer, who is also the vice, president of the St James FA. "Faulkland gets fair play award every single year and we are eight years old at the end of the month. This is the first such incident that we have ever had. It's always a work in progress when you're dealing with multiple and different personalities.

"We have played 10 matches so far this season and have now only received two red cards. So despite the fact that we have brought in players from different clubs who have a history with red cards or disciplinary issues so to speak, I wouldn't say it's a major problem. We are equipped to deal with it," said Palmer who is also the guidance counselor at William Knibb Memorial High School.

"If we should look at Ewan Barton, when I got him from Granville last year (January) every other game he got a red card and since being here he has not received any," he added.