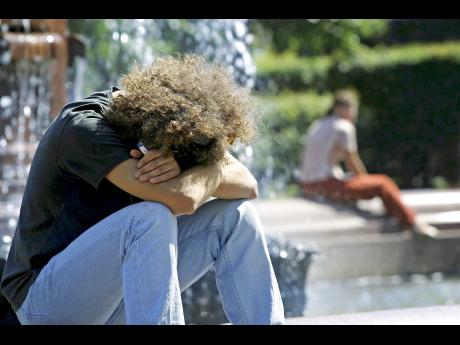 I have a problem that I want you to help me with. I am a 23-year-old young woman and the mother of a four-year-old son. My problem is that I have been in a relationship with a man for the last two-and-a-half years.

This man is 49 and he acts like a teenager. He has six children but he is only responsible for two. He is a security officer. When he gets paid, I have to wait until he gives his children money. He gives me whatever is left to buy food for the house.

I have to show him the receipts. He checks the goods and the change to see if I have short-changed him. He doesn't want me to work. Each time I try to look for a job, he fusses about it. When we argue, he hits me.

I have always been honest with him because I want him to trust me. I tell him everything. I don't hide anything from him, yet, he doesn't trust me.

He accuses me of cheating every day. I can never own a phone because if it rings and it is a male, I have to give him the reason why the person has called. If I don't give him a reason, he destroys it. Whenever we argue and I attempt to leave, he destroys whatever he bought for me.

His two eldest daughters always call him and ask for money and he always argues about it. When he does, I tell him to stop arguing and simply explain to them that he doesn't have it. Whenever I say that to him, he takes whatever he had planned to give to me to them.

Pastor, I am really stressed and I need your help. He doesn't want me to talk to anyone. He wants me to lock up in the house every day.

My son doesn't live with me, he stays with my mother. I told him I want to go back to school, and he said he is not going to send any woman to school. I also told him that I wanted his help to build a house and his response was that he is not making any house for another man to come in.

Pastor, he is talking about marriage. What should I do? Please help me. Keep up the good work.

You have allowed this man to treat you as if you have no intelligence at all. You shouldn't write to me to hear whether I would tell you to leave this man or stay with him.

I can't find any reason why you should stay with this beast.

First, this man is living in the Stone Age. He believes that he has the right to control a woman and to tell her whether she should be employed and earn her own money.

He has been able to get away with that because you foolishly listen to him. You need to declare a revolution in that house. By that, I mean you should stand up to this idiot and whenever he destroys your property, you should go straight to the police and have him arrested. You are too good a woman! It is because you are so decent why he behaves in that manner.

This man does not want you to work but at the same time, he is not supporting you well - counting every cent he gives to you and wants a report on what you buy for the house. He is crazy!

You have a right to receive calls from your friends, whether they are male or female. What kind of love can you have for a man who does not trust you? He is a 'fool fool' man, and he ought to be ashamed of himself.

You don't think a whole lot of yourself and that is why you are living with him.

I want you to stand up for your rights. Get a job and declare your independence. There must be another place where you can stay.

I want to hear from you again. Whenever that time comes, I want to hear that you have left this man. You can do better, I am sure.