One night stand got me pregnant 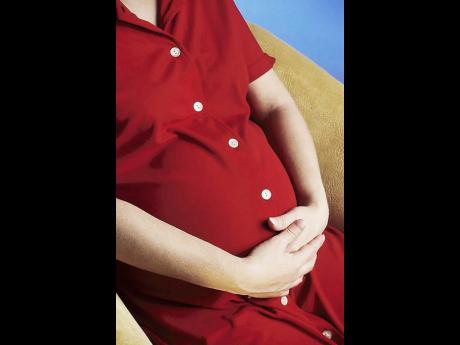 I am 17 and I have a very bad problem. I have a sister on my father's side, and I went to spend a weekend with her. She introduced me to a guy from the community.

She said that he is related to her boyfriend. I told her that I was not interested in him because he bleaches. She said I shouldn't mind that, as long as he is giving me money.

One night while my sister and her boyfriend were in their room, I heard a knock on my window and I looked out and saw him. I told him that I couldn't let him in so he should go away.

He went away, but not for long. He came back with chicken and knocked again and said he brought something for me. I still told him that I could not let him in.

He said that he didn't have to come in; I can come out. So, I went and sat on the verandah and then I opened the grill quietly and let him in.

He told me how much he loved me and that he broke up with his girlfriend. All that time, my sister and her boyfriend were in her room.

He came behind me and hugged me, and then he turned off the light and was fondling me. I told him that I was afraid to have sex with him, and he said nothing would happen to me because I am only 17 and he would pull out, because that's the way he used to have sex with his girlfriend.

He is 19. We sat down on a hassock and he put his back to the wall and had sex with me. I was scared because it was the third time I was having sex.

The other times were with my boyfriend and he used the condom.

I went back to the country and when I missed my period, I called my sister and told her what had happened. She started to quarrel and say that I shouldn't have let the guy in.

She sent me money to go to the doctor and the doctor confirmed that I am pregnant. Now, this guy is saying that the child is not his and he is not going to support a 'jacket'.

I did not tell my boyfriend the truth, so he thinks that the child is his. But, I am afraid that he will find out when the child is born.

My sister wants me to come back so that she can talk to the both of us together. My mother asked me how is it I am getting so fat.

Please, tell me what to do.

This guy saw that you were a gullible, naive girl and easy to persuade. So, although you told him that you were not willing to let him in, he figured out that he could use 'fast food' to entice you. And, that is exactly what he did.

If you were not interested in his nonsense, you could have made noise and caused your sister and her boyfriend to hear, and come to your rescue; but you didn't.

You had his food quietly and then you paid for it by having sex with him.

Now, let me hasten to say that this guy is a wicked fellow. Now, he is making you look like a bad girl by saying that he is not responsible for your pregnancy.

I am not going to encourage you to fool your boyfriend. You know that this man did not get you pregnant. Therefore, you should not deceive him.

You don't have to tell in details what happened. That might be too embarrassing, but at least you will have to say that you cheated on him.

Don't be numbered among the women in Jamaica who give their men 'jacket'. And, please, let your mother know that you got involved with a man in Kingston and he got you pregnant.

By the way, you are only 17. You need a profession, so as soon after you have given birth, try and go back to school.

I hope your boyfriend will forgive you for the big mistake that you have made. But if he doesn't forgive you, don't hold that against him. Accept what has happened as a big learning experience.