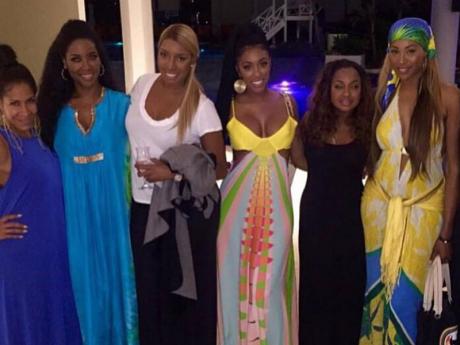 Those are all celebrities who have graced the grounds of Jamaica in times past. And in times present, like a few days ago more stars have visited the popular Caribbean Island.

The team of women recently visited the island to film parts of the show.

Though Leakes was not part of the trip originally and surprised the rest of the RHOA team with her visit, she was first to post a picture of their luxurious Jamaican scene.

The image which saw Leakes and others posing with a chef, seemingly from the hotel in front of a beatiful back drop bore the caption, "Guess who's coming to dinner??? #‎RHOA #‎Jamaica #‎SurpriseGuest."

And a surprise it was. While most tried to down play Leakes' visit, one cast member, Kenya Moore who stands exactly beside Leakes in most of the pictures took to Twitter to rant, claiming that Leakes had blocked her on the social media network.

The all new season of RHOA will commence in one week.