'This means a lot' ... Dacres revels in national sports award 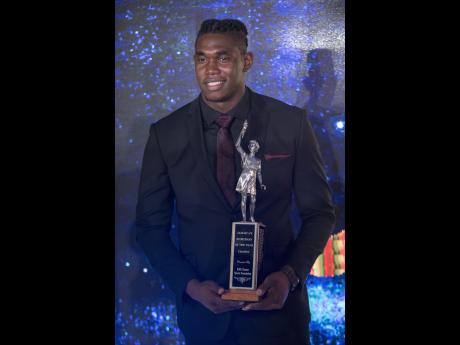 Discus star Fedrick Dacres, the RJRGLEANER National Sportsman of the Year for 2018, says winning the award as a thrower has placed him on another level, considering the country's riches of talent in the sporting arena.

It was an achievement that left the 24- year-old UWI student both surprised and thankful.

"This year was a truly breakout year, so it's just really an overwhelming feeling," Dacres said. "I just wanted to go out and do my best, but to win the award means I am at a new level because this is Jamaica and Jamaica is a sporting nation, so to actually win an award - an award like this, means a lot."

"Throwing is actually a European thing, so for a thrower to actually top Jamaica as Sportsman of the Year, I am surprised and thankful all the same. But, of course, this year was really good for me. I had a setback but I think I got my best performance like a week after that. So I wouldn't change a thing as I think it helps me to cope with injuries and just focus on building and being better," Dacres added.

Dacres, who was also recognised as the NACAC sportsman of the year, said that he along with training partner Traves Smikle and shot put standout Danniel Thomas-Dodd brought Jamaica's throwing to the forefront of world athletics and this year, he expects to continue challenging the best and doing well, especially at the World Championship this year.

"Last year was a wake-up call for a lot of naysayers and a lot of European throwers to see that Jamaica has very good throwers. A few of us are actually coming up and making a dent in the European dominance, so I expect a great fight this year for the World Championship. I have no doubt that I will have to bring my A game, because there will be no giveaways. But you will have to work hard for what you want and that is why am I here and that's what I am doing," he continued.

Dacres also believes more local youngsters are gravitating towards the throws and thinks Jamaica will only get stronger in these events in years to come.

"I think there are more (Jamaican) throwers to come out there. When I look at the youths, there are more throwers at the meets, so people are actually believing in the throws and field events now, so we are not just a sprint nation, we are getting well-rounded. But the dream is to see more throwers and it's coming so I am just waiting to see what happens," Dacres said.