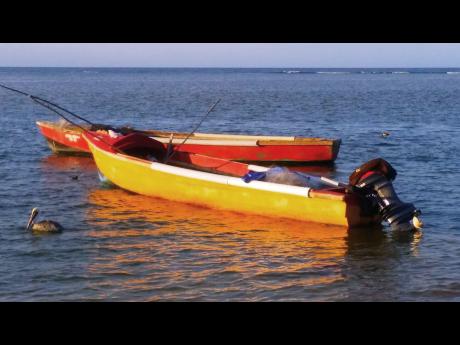 Boats at a fishing village in Trelawny.

I have been reading your column for a long time. I can say that you are a very patient man. Sometimes, when I read what these people write, I wonder why you don't run them. I listen to your show also, and I learn a lot from it.

My boyfriend is a very selfish man. We are not living together. I am living with my grandparents, and he is living with his parents. He is a fisherman. He goes to sea, and he hardly brings me a catch. I go to the supermarket, and I have to buy fish. Whenever I ask him why he doesn't bring me fish, he tells me that his catch is never big enough.

I am working, and I have to buy everything. I hardly get anything from my boyfriend. When his birthday comes around, I buy him stuff, either a nice shirt, underwear, or pants. But he buys me nothing.

Last Christmas, I bought him pants and a matching shirt because I wanted him to take me out on Boxing Day. He came to see me on Christmas Eve. When he was leaving, he handed me an envelope with money. I opened it when he was gone, and when I saw that there was only $3,000 inside, I called him on the phone about 1 a.m. on Christmas Day and told him that that is not how a man should treat his girlfriend. He hadn't given me any money for months. I told him that if $3,000 is what he could afford to give me for Christmas, he should take it back. I could do without it.

On Christmas Day, he showed up for dinner, and I fed him. He did not even buy a gift for my grandparents, and he knows that I am living with them. So, the outfit that I bought for him so that we could go out on Boxing Day is in my dresser until today.

Do you think that I should have given it to him? What do you think of this man? I am hoping to get a house from the National Housing Trust. I asked him if he could join up with me, but he says he has no savings and that I would have to get pregnant for him first. I told him that we will talk about it a next time. I have no intention to get pregnant for this man.

This man needs to be taught how to relate to a woman. He sees you as his girlfriend, and you see him as your boyfriend. But the man is mean. Although he is a fisherman, he has never taken fish for you, not even occasionally. And he is always lying that things are hard. He should do better than that. How can life be so hard on him that he cannot even give you fish? It is difficult to understand that.

I can't believe that this man is speaking the truth. He is not even interested in purchasing a house. He brings you absolutely nothing. I am afraid that you are going to suffer if you continue with him in this relationship. Let this man go his way. He has let down every fisherman.

I can't blame you for holding back the gifts that you brought for him for Christmas. Maybe you should give them to someone who is in need, like a brother or a cousin. Don't spend any more money on this man, and don't encourage him to hang around. Keeping him around might prevent a good man from dating you. This man is worst than a heavy load.